S4: a short guide for the perplexed

I recently attended the Bioconductor 2019 conference in New York City, where I was lucky enough to give a workshop on my Bioconductor package plyranges and present some new ideas I’m working on. After some discussion with both Bioconductor veterans and new-comers there was general agreement that it was hard to find good resources or even a beginner’s guide for learning S4. This blog-post is an attempt to rectify that.

S4 is a formal object oriented system in R, it’s named S4 since it was a part of version four of S language. It’s implemented in the methods package created by John Chambers and maintained by the R core team. It also is one of several packages that ships with base R and is loaded on start up.

Compared to other object oriented paradigms in R, S4 requires a developer to write classes that follow a strict structure - an S4 object has its components defined upfront using slots. A well designed class can avoid code duplication, and the strictness helps a developer to ensure their code is correct. As will we see later, defining an S4 class requires components and their types to be declared upfront, meaning that S4 classes are also self-documenting.

As with any other programming language or paradigm, you may have to use S4 because everyone else is using it. Take the Bioconductor project for example. They have defined standard S4 classes in their ecosystem to represent many types of ‘omics’ data. Developers are strongly nudged use these classes and their associated methods. This has two massive benefits: firstly, a developer doesn’t need to invent their own class and secondly, it enables interoperability between many different packages.

Learning to program with S4 can be daunting - especially for new users of R or those who are used to the relative simplicity of the tidyverse ecosystem. I remember being incredibly confused and overwhelmed when I started to learn it (a lot of the documentation and guides are extremely technical) and found myself reading a lot of other people’s code in order to figure out what on earth is going on. From both a developer and user perspective, I think the essence of S4 can be distilled into three principles.

Principle 1: it’s all about the abstraction

S4 objects don't do anything; they are pure data. Accepting that is the first step towards mastery of OOP in #rstats.

The design of an S4 class is merely a way of setting up an abstraction for a data analysis problem. This is often the hardest part of using S4, coming up with a ‘good-enough’ abstraction for the problem at hand.

Let’s try creating an S4 class for a Turtle. A turtle can move in a path in two dimensions as illustrated below:

We can define a class to represent a Turtle as follows:

We can create an instance of a Turtle using new:

Slots can be accessed using @ but we will see later it’s better to define functions called getters that access each component of the object.

We would like to ensure that when we create a new turtle that it’s current location is always a numeric vector of length 2, and that it’s orientation is in degrees between -360 to 360. We’ll also check that the path is a matrix with two columns. We can do this by creating a function to check our turtle is valid:

This updates the class definition, to include the checking a turtle is an OK turtle.

Finally, we need an interface to creating a objects of class Turtle. This is called a constructor. Generally, this is a function that calls new and has arguments corresponding to the slots of our object.

Calling new now that the validity is set, will check that the arguments provided to the constructor result in a proper turtle. We haven’t included an argument for the path, cause our Turtle hasn’t travelled anywhere yet…

Note that it’s a convention when using S4 to use CamelCase (I don’t make the rules!).

So far we can’t do anything interesting with turtles, we need to define some methods!

Both S3 and S4 use generic functions which is a little different from other object-oriented programming languages (it is a variety of ad-hoc polymorphism if you like that kind of thing). A generic function determines how a method is called when an argument is a given class (or combination of classes). In general, a generic function should be created if you plan to reuse it for many distinct classes or if it will be useful to other package developers.

For example, we could create two generic functions that represent a turtle moving forward and a turtle turning.

This creates a function called forward with an argument x, called the signature of the generic and ... which can be other arguments that will determine how a turtle moves. The class of x changes which forward method will be selected.

Similarly, we can implement a generic for reorienting a turtle.

To complete our interface, we will also create generics for accessing and replacing each slot of our class.

We now have a bunch of generics next we need to create methods for our turtle. Let’s start simple with our getter functions. To create a method, we use setMethod with : * the name of our generic * an argument called ‘signature’, that tells us the class the generic will dispatch on * a function that tells us what the method does

We can also create our replacement methods, these will update each slot. A turtle’s orientation and path are always updated relative to where they already are positioned.

Now we can implement methods for forward and turn:

Most of the time, you probably don’t need a new generic function but rather to reuse an existing one (for Bioconductor packages generic functions are contained in the BiocGenerics package) by setting a method for your class. For example, maybe we want a prettier printing method for our turtle, for S4 classes, the print method is called “show”:

When designing a new class it’s a good idea to target methods for generic functions that are in the base API. This ensures portability of your code and means that your class behaves in a way that is already familiar to a user.

Now we have implemented enough methods to make our turtle move, we can start getting our turtle to move around in 2-d! For example, we could move in a triangle: 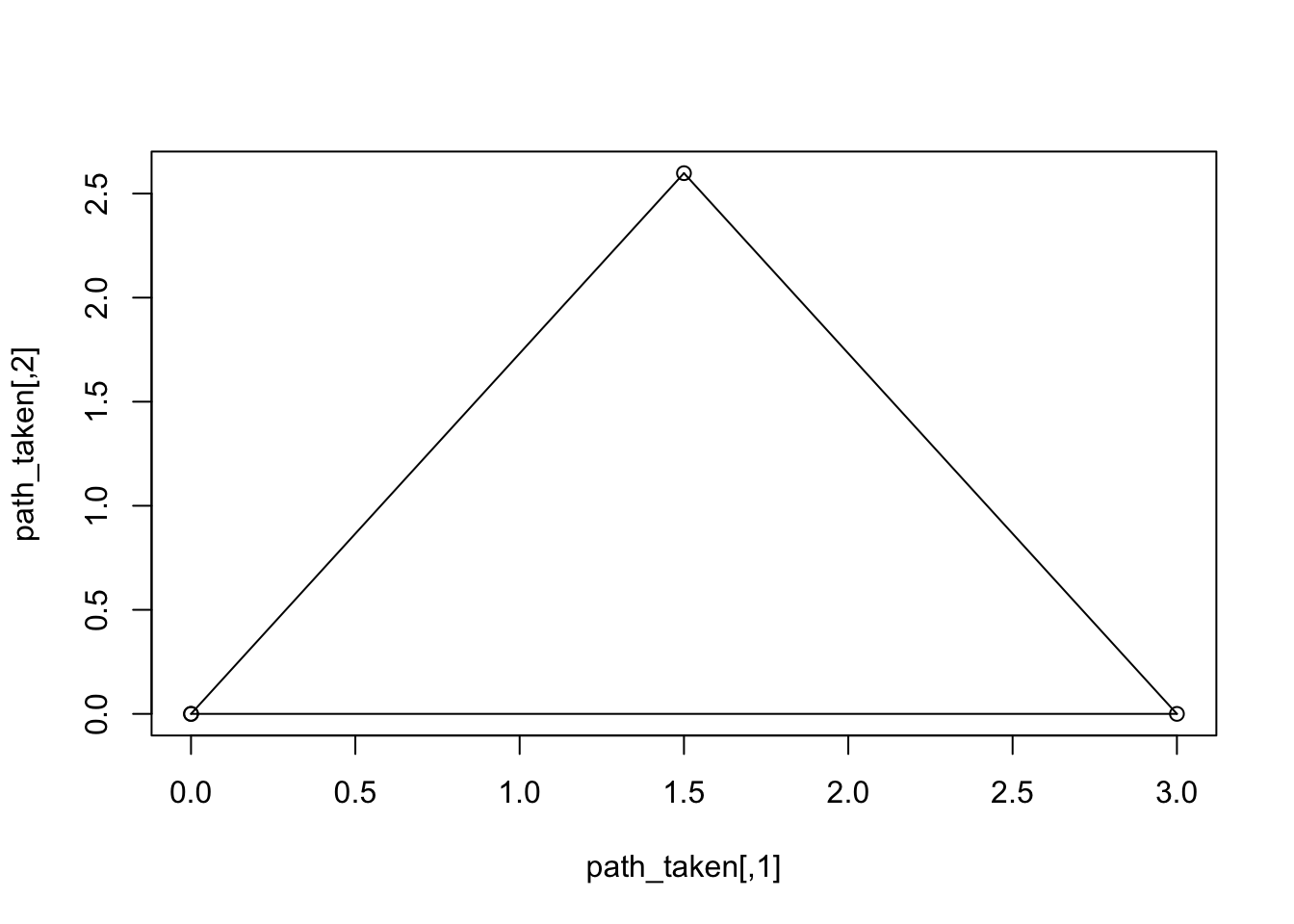 Principle 3: designing is hard, reuse instead!

If you're going to have a big multi-site collaboration, the language you're going to use isn't what you need to agree on. They key is stadardizing data structures. - Robert Gentleman #Bioc2019 #RGentlemanSymposium

In R there is usually package for the task you would like to perform. Similarly, when using S4 somebody has probably done the hard work of designing a class related to an analysis or problem at hand. In Bioconductor, the community has standardised core data structures related to all aspects of ‘omics’, with two key examples being the SummarizedExperiment and Ranges classes. Instead of inventing your own class you can extend (or just use) other package’s data structures. If the class has been implemented well, you won’t have to go through the boring process of implementing an interface such as making setters and getters.

Let’s extend our Turtle class, to a Turtle that’s holding a pen. A turtle holding a pen will include three new slots: colour, thickness, and an on/off switch.

The argument contains = "Turtle" tells setClass we are inheriting from the Turtle class. A TurtleWithPen is still a Turtle but has additional slots corresponding to a Pen. We can write a constructor for a Turtle holding a pen:

Our TurtleWithPen inherits all the methods associated with Turtle, including show which is why the displayed object looks the same. All the same moves we made with an ordinary turtle can be made by one holding a pen:

Now we want to modify the show method, if the pen is on, then will animate the Turtle’s path, otherwise we will show the Turtle has normal.

Now the show method will animate, if the pen is switched on, otherwise we will call the regular Turtle method.

We can try this out by having our Turtle walk through an equilateral triangle:

But if we put the pen up, then we get the usual show method:

The somewhat silly turtle graphics example has been my attempt at demystifying S4 programming:

Where to find out more?

This post has barely scratched the surface of what S4 can do. We haven’t really touched on the ideas of multiple inheritance or multiple dispatch. Hopefully though if you’re new to S4, the ideas behind it are a little less scary!

There are several resources for learning more about S4: